I’m going to go through some of the interesting points of Marist’s recent in-depth presidential election poll, released August 5. But the takeaway is – Donald Trump isn’t just losing, he is doing impressive damage to the Republican brand. According to the poll, Trump is losing registered voters by 15%: 33% to 48%. This is just one poll from one snapshot in time, so it’s not worth focusing on the overall figures (see fivethirtyeight.com for excellently aggregated polling data). But the details are revealing, because they give us information about how a likely Trump loss will affect GOP races across the country, and even the future of the Republican party. 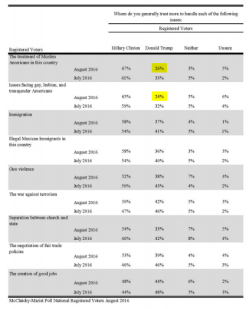 I have highlighted those categories where Trump’s percentage is lower than the percentage of people voting for him. In these four categories – treatment of Muslim Americans, issues facing LGBT Americans, and having the experience or temperament to be president, Trump’s ratings are so low that he must be losing some portion of his own voters. These are the things that are dragging down his presidency, and the first two issues are going to be lasting headaches for the GOP in down-ballot races and future elections. It will be an uphill battle to prevent the party from being defined as anti-LGBT and anti-Muslim for the foreseeable future. Of additional note, both candidates do very poorly in the category of honesty, which may predict a

Of note, Trump also loses to Hillary Clinton in every other age group. But for 18-29 year olds, 2016 is among their first presidential votes. If they are predisposed against the GOP by Trump, Republicans are going to have major issues maintaining a constituency in the future.

A few other figures are worth mentioning. Both candidates have high unfavorable ratings, but people seem a lot more excited to prevent Trump from being elected. 45% of registered voters find a Clinton win mostly or totally unacceptable, 59% think the same about Trump. Even among those who say they will vote for Trump, Trump is not very popular. Only 30% plan to vote for Trump because of the candidate himself, with 57% attributing their vote to a distaste for Clinton. Comparatively, 57% of Clinton supporters are voting for her and 40% are motivated to vote against Trump. It is unclear what affect this fear-based voting will have on turnout, but it does give more information about the nature of the unpopularity of both candidates (Clinton is mostly unpopular with Republicans, Trump is not popular with supporters of either candidate). It should again be emphasized that all of these results are drawn from a particularly bad time for Trump, and if his voter numbers rise, the rest of the questions are likely to rise accordingly.

One more thing. Much has been written recently about third parties, but when the third party candidates’ names aren’t explicitly included in the question, only 2% choose the “other” category. This may indicate a lack of dedicated support for third party candidates, and their votes in November may be significantly lower than polls currently indicate. If this is the case, it could help Trump’s numbers because there are a lot more supporters of Libertarian candidate Gary Johnson than Green Party candidate Jill Stein.